“Coming this fall” is what the macOS Monterey product page states. Well, fall is here, and Monterey is expected to be released soon.

Once it is released, you do not want to be caught off guard like Karen Haslam did last year. This MacWorld editor “lives and breathes Apple” yet has no clue how to prepare for a macOS upgrade. Don’t be like Karen, be adequately prepared. This article aims to help you be just that! 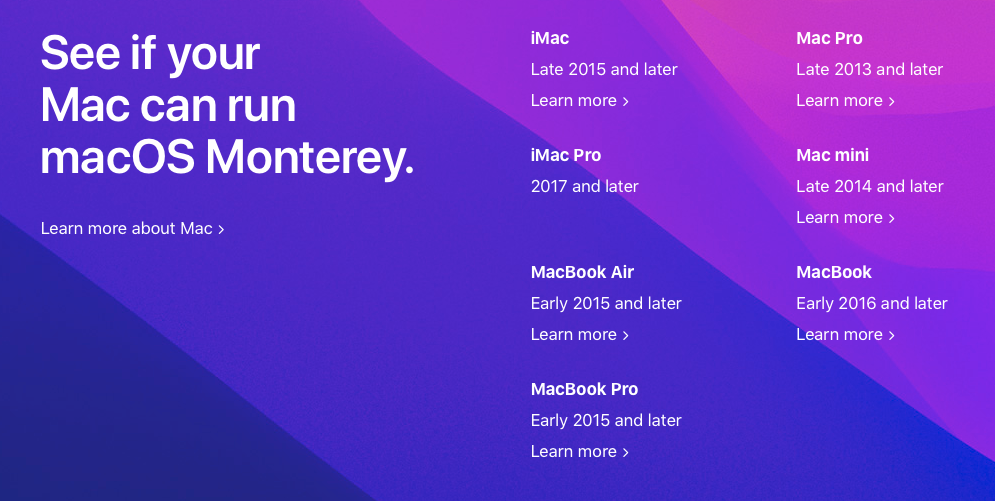 If your Mac is one of the ones listed in the image above or newer, it can run macOS Monterey.

Just because your Mac may be officially supported to run this new OS, does not always mean you should install that OS.
Let’s use Big Sur’s complete system requirements and a year of experience as an example. Models aside, this is what these models need to have available at a minimum:
• 4 GB of RAM
• 35.5 – 44.5 GB of free drive space
There is no reason to assume Monterey’s RAM and storage requirements will be any different.

Your Mac is a supported model, let’s say a 2015 MacBook Air, which has 4GB of RAM and 128GB SSD. It can run Monterey but should it? Historically systems that just meet the minimum requirements should stay away from the latest OS. Sure, it may run Monterey beautifully, but how will it run once it has Monterey and Safari with 15 tabs and iTunes and Mail and Messages and Discord running all simultaneously? It’ll run like a two-legged dog. These system requirements are for the OS only and do not account for all the additional resources you’ll need to run other software on top of that OS.

Take the system requirements and double them, at least, to keep having a fun Mac experience. 8 GB of RAM, the more storage space, the better, a mid or high-end graphics card and a processor that’s not a bottom of the barrel i5 but at least an i7. That will ensure your Mac can run Monterey just fine, won’t bog down just by loading up Facebook, and give you a few more years of fun use.

Have a Mac with a spinner hard drive in it? (Looking at you iMac and Mac mini users), I suggest you forget about Monterey. The APFS file system has been very unforgiving on spinners since Mojave and has gotten worse since.

Your 2015 MacBook Air may run Monterey, but you can forget about all of these features mentioned above. Your expensive 2019 Mac Pro can run Monterey, but even with all that power, can not use most of the above-mentioned features. There are a lot of Monterey features that will be released at a later date with software updates, and we don’t know if they will have similar restrictions.

So really think it through. If you want the latest flashiest new features, make sure your Mac can make use of them.

This one is so broad I’m not going to give specific examples but any software you use, plugins for software, etc. Make sure they work on Monterey if you decide to upgrade. Don’t just assume “if it works on Big Sur, it’ll work on Monterey” as it might not. Or maybe you’re happily cruising along on macOS El Capitan or High Sierra and figured, “let’s try out this new Monterey thingy”, more than likely, a ton of your software will no longer work after upgrading.
So do your research. Visit the software developer’s website and look up your versions and their compatibility with Monterey.

The right time to upgrade

If macOS Monterey is released to the public tomorrow, do you upgrade right away? Common sense says, “hell no!”. There will be bugs, there will be more bugs, and there will be other bugs on top of that. Keep in mind, since 2011, you, the end-user, have been the primary tester for every macOS release. Apple has committed to a yearly release schedule and does not have the time or resources to test as thoroughly as they used to in the pre-Steve Jobs days. And even back then, there were plenty of bugs in the first releases of new OS as Apple can’t test every single software and hardware combination out there.

So I recommend waiting. Wait until macOS Monterey 12.1 is released, at least, before considering the upgrade.

But, you might upgrade the second you get a chance on release day. In that case (you’ve been warned), at least take some precautions. And the following tips are for everyone, even those that waited patiently until most bugs were fixed.

At any time, but especially before you perform an invasive procedure such as an OS upgrade, you should have your backups in order. Have Time Machine running, have frequently updated Carbon Copy Cloper, SuperDuper, Retrospect, or ChronoSync backups, have a bootable clone, etc. Just make sure you have what’s needed to revert to a previously working state if the upgrade goes bad or presents issues. Also, make sure you test these backups to ensure they are reliable before performing the OS upgrade.

In short, don’t just click “install” when the message pops up to upgrade. Do your homework, do your research, get those backups verified, and then you’re ready to dive in.

2 thoughts on “macOS Monterey, is your Mac ready for it?”