I added fans, took fans out, tested different fans, experimented with different thermal pastes and even thermal pads. The biggest change I wanted to make to the cooling since day one, was the heat sink. The aluminum block got the job done but I wanted better so of course the search began for a copper heat sink. Found a few over the past few months but they were always overpriced.

Finally I got my hands on a complete FW800 MDD with 1.42GHz CPU and a copper heat sink for $40! This was a sale from another state though so I asked if the seller could ship me the CPU card and heat sink and we’d figure out the rest later. Well today it arrived.

As soon as I saw the box (heat sink, CPU card and Cube power supply inside), I had a feeling this was not going to be a fun unboxing… 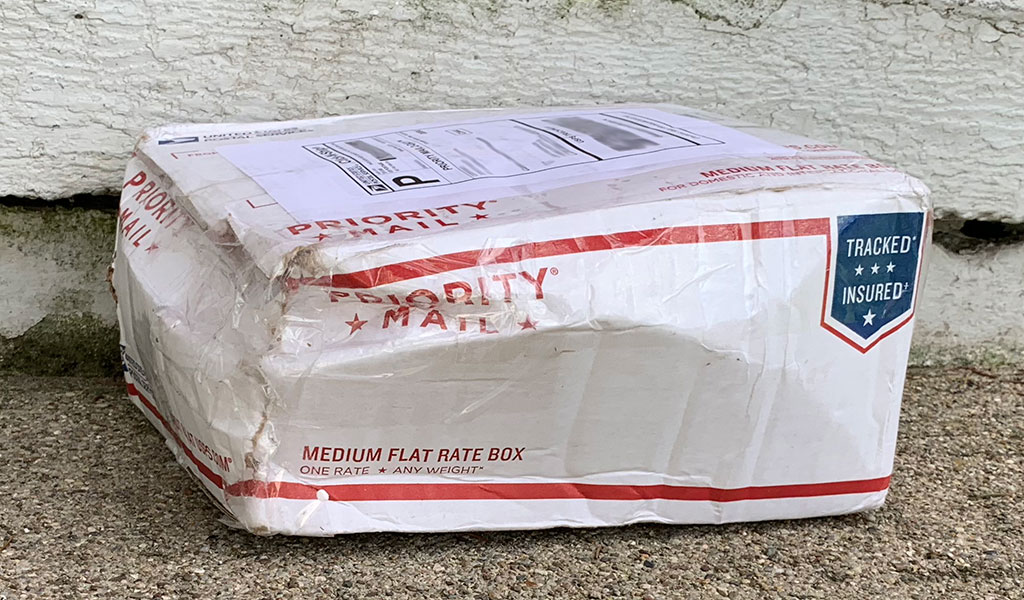 And I was right…

Well shit. Not how I had hoped to start my evening but copper is copper, the heat pipes are not bent or broken so maybe I can make this work. After quite some time fiddling around, I managed to turn this into something resembling it’s original form again.

Getting these shipped and arriving undamaged appears to be a real challenge. Here is Greg Hrutkay’s heat sink after shipping..

I’ll continue the search for a new one as this looks like trash now and it’ll be a major eyesore for me. For now, it’ll get the job done though. So let’s take a look at which cools better! A 3.5 pound block of aluminum or a 12 ounce copper pad? (The copper heat sink in total weighs 2.8 pounds but 2 pounds of that is the aluminum mounting bracket, estimated). For those reading that use a system that makes sense, that’s 1.59 kg for the Aluminum VS 1.27 kg (226 grams without the mounting bracket, estimated).

Let’s cut straight to the chase here. A few tests were performed and here are the results:

The aluminum heat sink does have more mass and surface area but this is also it’s flaw. Heat pipes, as seen in the copper heat sink, carry the CPU heat away as fast as possible, to the copper fins. The heat dissipates into the surrounding air and the pipes keep it away from the CPU. The aluminum heat sink heats up entirely, reintroducing some of that heat back to the CPU. A heat pipe design will almost always be more efficient at it’s job than a solid block. And a few degrees matter in computing. Longer heavy load times until potential throttling occurs, cooler components which should increase longevity, less fan noise, etc.

Since I know you’re wondering, let me explain why I marked some temperatures in red.
57C is the point where the main fan on an MDD starts revving up. The Mac seems to be happy with anything under 57C but once that temperature is reached that the fan starts increasing in speed immediately. 57.1C louder, 57.2C even louder and with each decimal the fan kicks up a notch. Now I use this Mac almost exclusively for gaming which maxes out the CPU. I am always dealing with loud fan noise as the temperatures are always over 57C. With the copper heat sink the temperatures, even under heavy load, stayed well under 57C, so the fan sat at idle speeds which made a HUGE difference!

Now keep in mind I am using graphite thermal pads which outperform Arctic Silver and even Thermal Grizzly Kryonaut by a wide margin, so that helps keep my temperatures down as well but the copper heat sink seems to be the way to go on any CPU. Aluminum might be good enough but if you can shave a few degrees off, why not do it? Cost is a factor of course and copper heat sinks aren’t cheap. If you find one for a good price though, definitely go for it.

After publishing this article someone on Facebook mentioned “there’s another heat sink, a metal foil one”. Yes, this is indeed true. And I did not include it in the test because, well, it’s fairly useless for any CPU over 1.0 GHz really. But… that knowledge is so old, I can’t even remember where it came from. Is it true? Only one way to find out.

The metal heat sink (on the right) was subjected to the same tests and here are the results (Ambient temperature was lower this time, keep that in mind):
Idle at 55.1, max 55.2C
Geekbench max: 55.7C spikes, mostly 55.6C.
Xbench CPU, Thread and Memory test max: 55.1C
Grapher 7 3D examples render + 2x Yes Dev Null in terminal for 20 minutes, max: 55.2C, system locked up twice during this test once immediately and once after 5 minutes. Unable to complete.

I swapped in the copper heat sink and after a few minutes to warm up I ran the stress test again.
Grapher 7 3D examples render + 2x Yes Dev Null in terminal for 20 minutes, max: 53.6C

To be sure I wasn’t going crazy, I swapped in the metal heat sink again yadda yadda…. it froze 2 minutes into the test.

I have no explanation for these results. Even when making up for the difference in ambient temperature using the copper heat sink results as a guide, the metal heat sink gives the large aluminum block a run for it’s money! But under heavy load the whole system locks up, consistently. I went over this thing with a flashlight, pieces of paper and my camera… the metal heat sink wasn’t touching anything it wasn’t supposed to. As far as I could tell it didn’t warp when it got hot (it’s a solid piece of metal that surely needs much higher temperatures to warp). I can’t explain why the metal heat sink would cause the system to freeze. Greg Hrutkay told me he had similar experiences while using the metal heat sink, constant freezes. Unfortunately no temperature readings that would prove an overheating issue. The heat sink was hot but not as hot as the aluminum heat sink gets so I am not convinced this was an overheating issue. I trust the temperature readout of the CPU card as well which never got above 55.2C…. it’s a mystery. However the results are the results; the metal heat sink has the CPU’s running cooler than the aluminum heat sink but the system becomes unreliable.

This little addendum was to show you the metal heat sink is a horrible choice. I was wrong about the temperatures as it kept the CPU’s cooler than the aluminum heat sink but the fact it consistently crashes my Mac when it’s under heavy load makes this heat sink a no-go. For me, anyways. Some using this heat sink in a single CPU machine experience no issues. As to why it causes the system to lock up… I am open to ideas and theories here, please leave them in the comments!

One thought on “Further tweaking the cooling – Part 1”