How many fans does a Power Mac G5 have? Depending on the configuration this answer varies but you can be almost sure the answer is always one short. Let’s take a look at the Late 2005 Quad in this example.
– 2 intake fans (front inlet fan assembly)
– 2 exhaust fans (rear exhaust fan assembly)
– 1 fan in the PCI bay (speaker assembly)
– 1 fan for the hard drives (media bay fan)
6 fans total, right? Wrong. There is a fan behind the hard drive fan as well, part of the media bay fan assembly (in some models), and it does not get the credit it deserves. Without this single fan your G5 can overheat and even die.

So where is this fan located exactly? 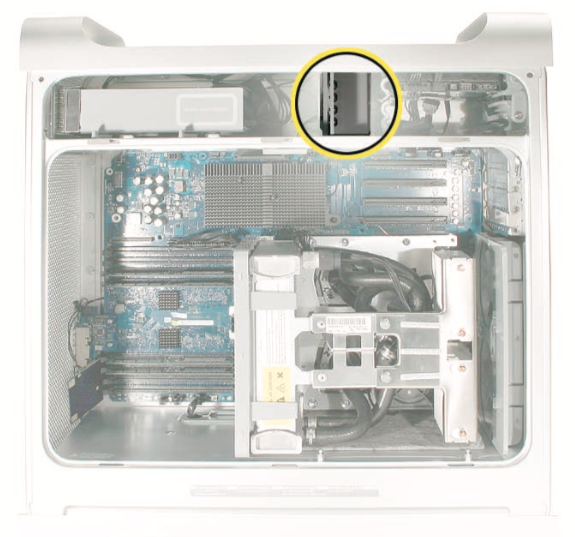 Take a peek behind your optical drive(s) and you’ll see it. 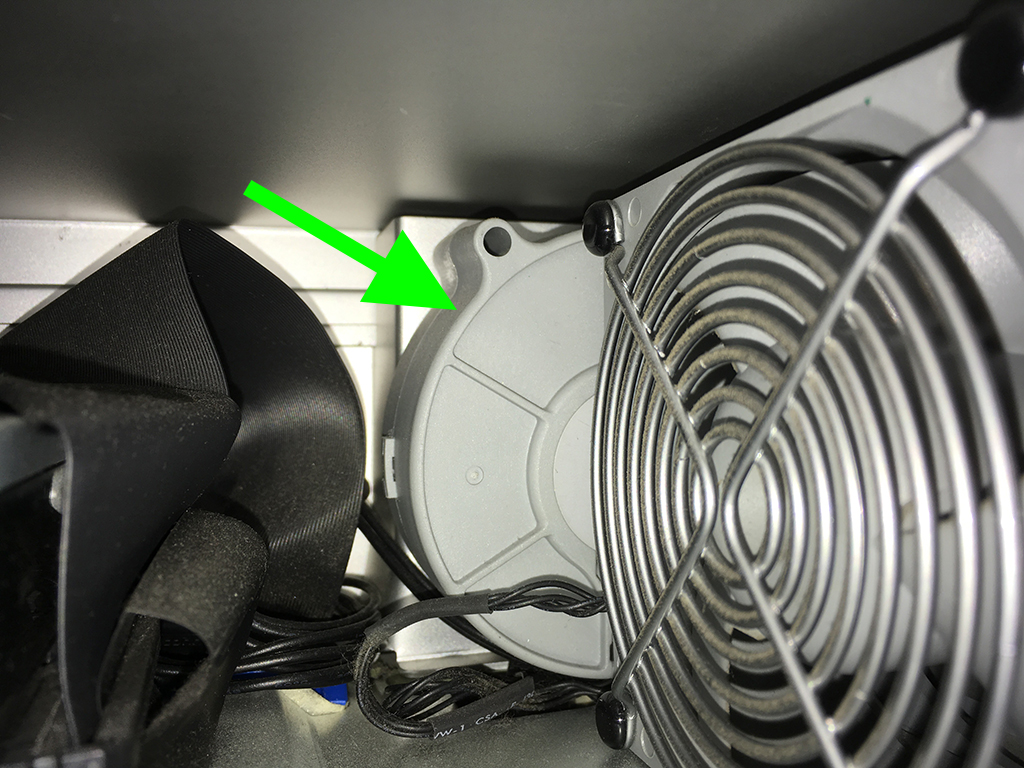 Sure it doesn’t look like much but it’s function is very important, as I mentioned before. This fan cools the back side of the logic board. If you thought all the cool stuff was on the front of the board, you’d be wrong my nerdy friend! Here is a photo of the other side of the board (click for full resolution): 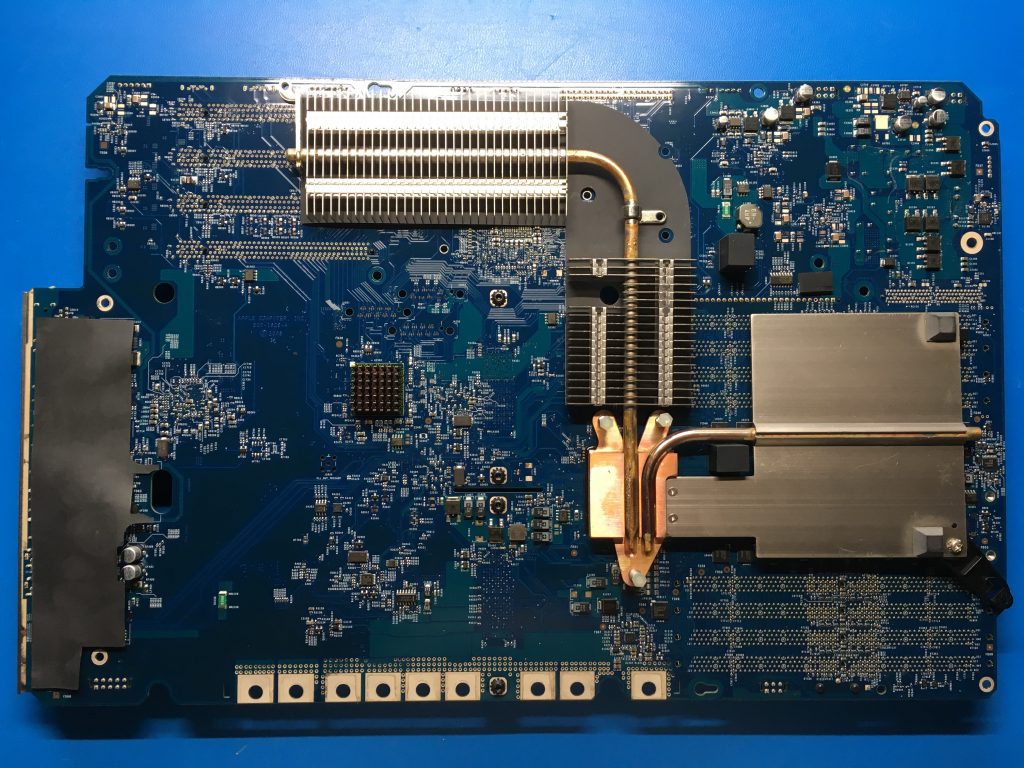 Those massive heatsinks are there to cool a single chip; the North bridge. 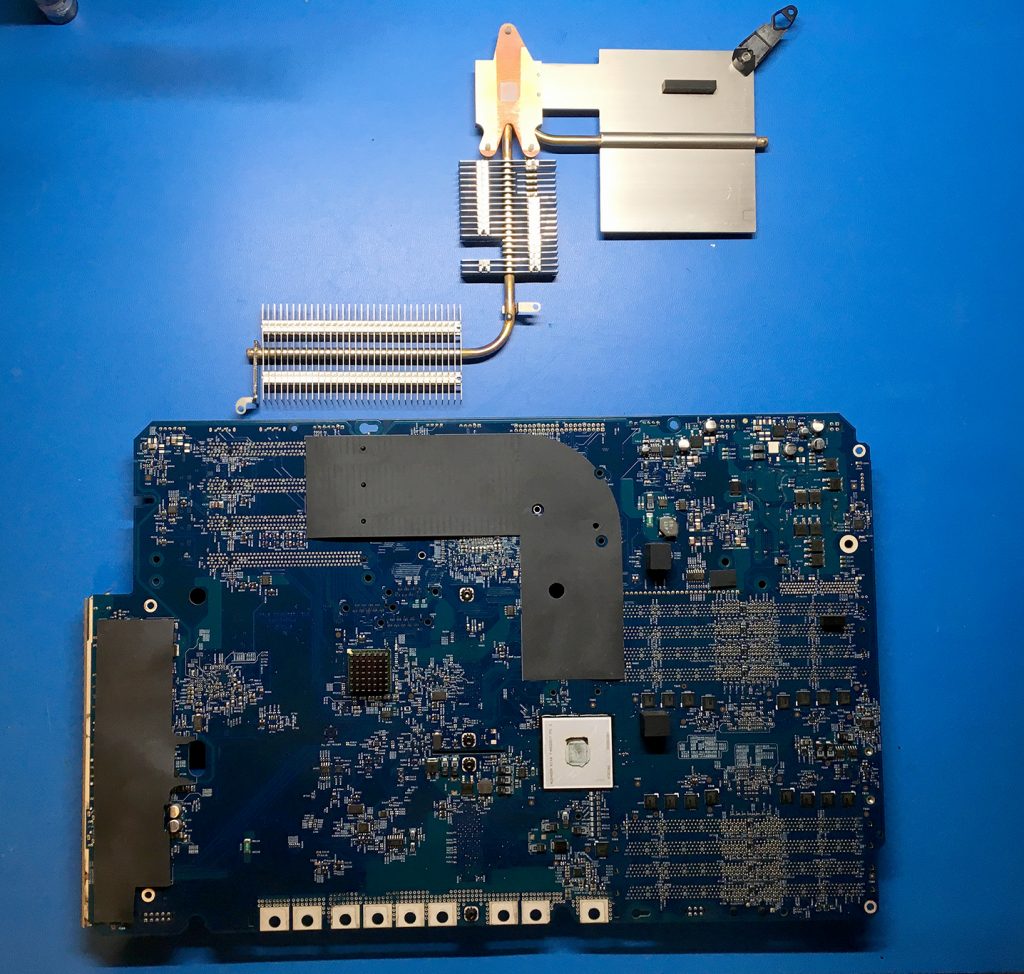 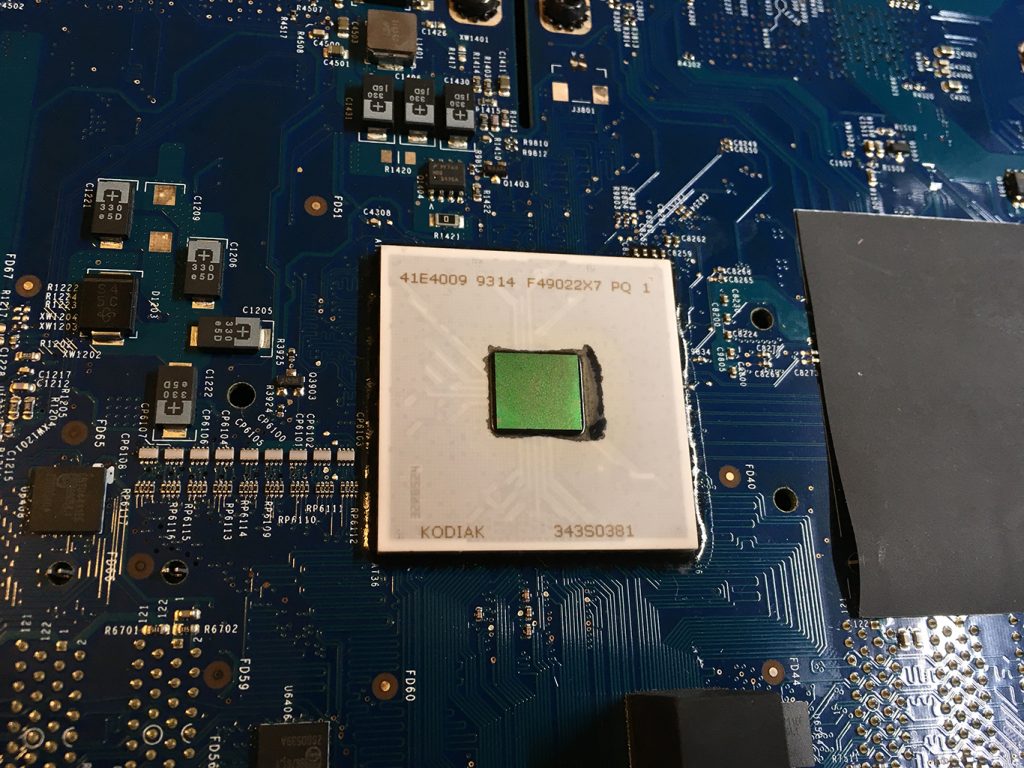 As you can tell by the amount of copper and aluminum Apple devoted to this chip, it runs hot. Very hot. And passive cooling is not enough to keep the temperatures in check as these temperatures can shoot up quick depending on system load. Active cooling had to be applied. With no space to get a fan aimed directly on to the heatsinks, Apple went with a blower fan that sucks air through a channel from the front of the machine, past the heatsinks and out the back past the hard drive(s). Here is that channel on the chassis behind the board: 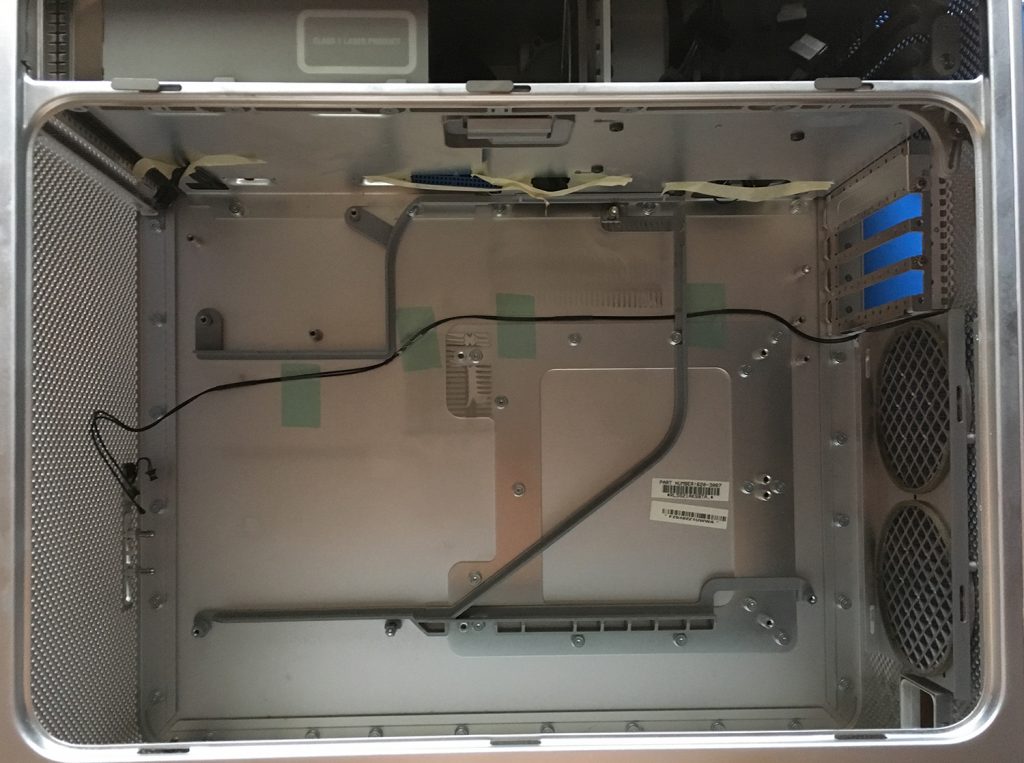 With some photoshop flipperydoo and your imagination, here’s how that channel cools the North bridge heatsinks: 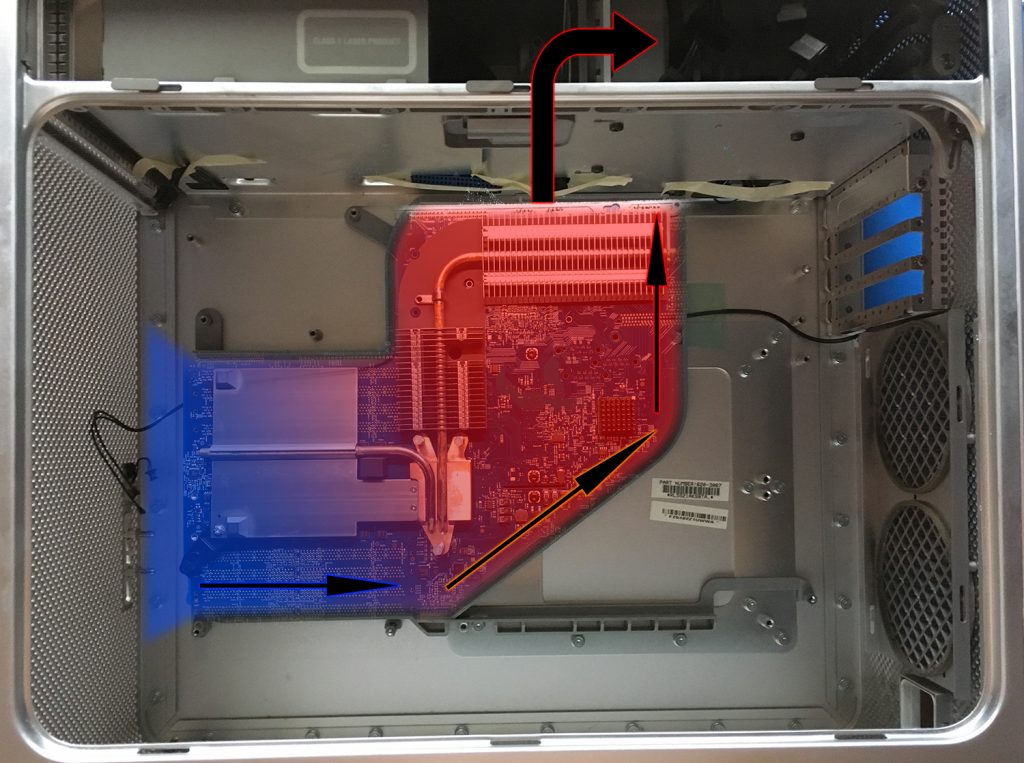 While it’s not a quick task to pull these things apart, dust buildup on these heatsinks and the blower fan can cause overheating and related issues, even if the rest of your machine is sparkly clean and properly maintained. Also, it’s been 13 years so the thermal paste on the North bridge chip is definitely due for a replacement.

Before you yank the board out though, check that blower fan first as it’s much easier to get to. To take out the fan, do the following first:
1. Remove the intake fans
2. Remove all PCI cards
3. Remove the PCI card guide (plastic bracket that holds full length cards in place)
4. Remove the speaker/fan assembly
5. Remove your optical drive
6. Remove the heatsink cover*
7. Remove the PCI divider*
* if you have a flexible extension for your screwdriver, these can stay in place.
The rest is simple:

This takes care of the media bay fan, with two more screws the blower fan is attached to the case. You can’t remove the fan to clean it so you’ll have to rotate it in place to inspect it and to clean it. Some models may also have the two fans attached and it can be removed as a single unit.
The fan will be a good indicator of how dirty your heatsinks are. If it’s completely gunked up, you may want to take out the board to clean the heatsinks. If it’s relatively clean, your heatsinks are likely in good shape too. Though you may still want to take it all apart to apply that fresh thermal paste. I was lucky and the fan showed little to no dust on the blades, this indeed translated in minor dust buildup on the North bridge heatsinks.

With your fans and heatsinks clean and your North bridge chip repasted (if you took that route), let’s nerd out a little and see what this chip is actually for. The North bridge, or as Apple calls it in this case; North Bridge memory controller and PCI bus bridge, handles a LOT of traffic. Data that flows to and from your PCI Express lanes, AGP lane, RAM, USB and processors is all directed by this one chip. PCI Express traffic actually comes from another controller chip, the Mid Bridge which in turn communicates with the “South Bridge I/O device and disk controller” chip (located on the front of the board under a big black heatsink right behind the PCI fan). The Mid Bridge communicates with the North bridge through a hyper transport bridge that is built in to the North bridge that can handle almost two billion transfers per second. Not too shabby, and that’s just one part of the chip.
More activity on any of these system components is more work for the North bridge which means more heat emitted. And those huge heatsinks suddenly start to make sense. Here is a diagram (thanks to LightBulbFun for the graphic) that puts it all in perspective with the North bridge highlighted in green: 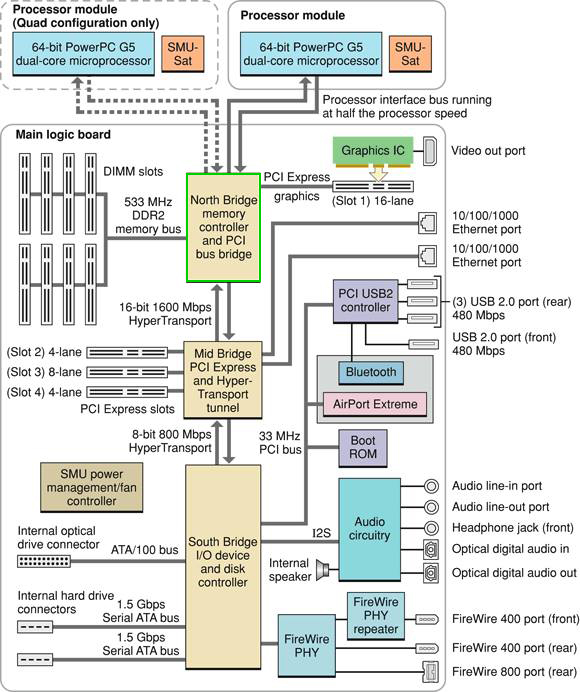 This chip doesn’t only look bad-ass, it’s an impressive piece of tech. Here is the diagram of just the Northbridge: 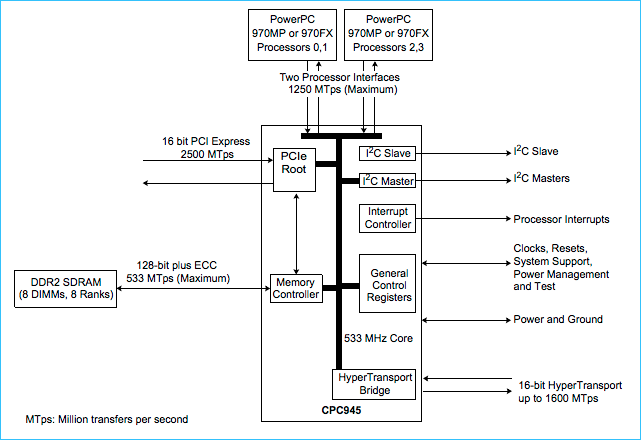 For all the gorey details on this chip, grab a drink and start reading this. Thank you to LightBulbFun for finding this spec sheet for me!

Without a properly functioning North bridge, your system is on it’s ass. Keeping it’s temperatures in check is therefore of course an important matter. Unfortunately the blower fan is completely independent from the system, no fan control software can touch it and no sensor software can even tell you how fast the fan is spinning. The fan is not part of the ASD testing, POST process or any other tests so even if it breaks the system will run as if nothing is the matter. The North bridge also doesn’t have a temperature sensor on it or on it’s heatsinks. That said, I have never seen one of these fail, ever. These Delta fans are very reliable.
Note: Blake Hanes mentioned that earlier G5 models do have a temperature sensor on the North bridge heatsink so you can monitor that. There is also an indication the blower fan may be visible in monitoring software on some systems but myself and the community are still doing tests to be sure. Thank you David Weidman for testing and Blake Hanes for the additional info and picture of a 2004 G5 showing the North bridge temperature sensor. 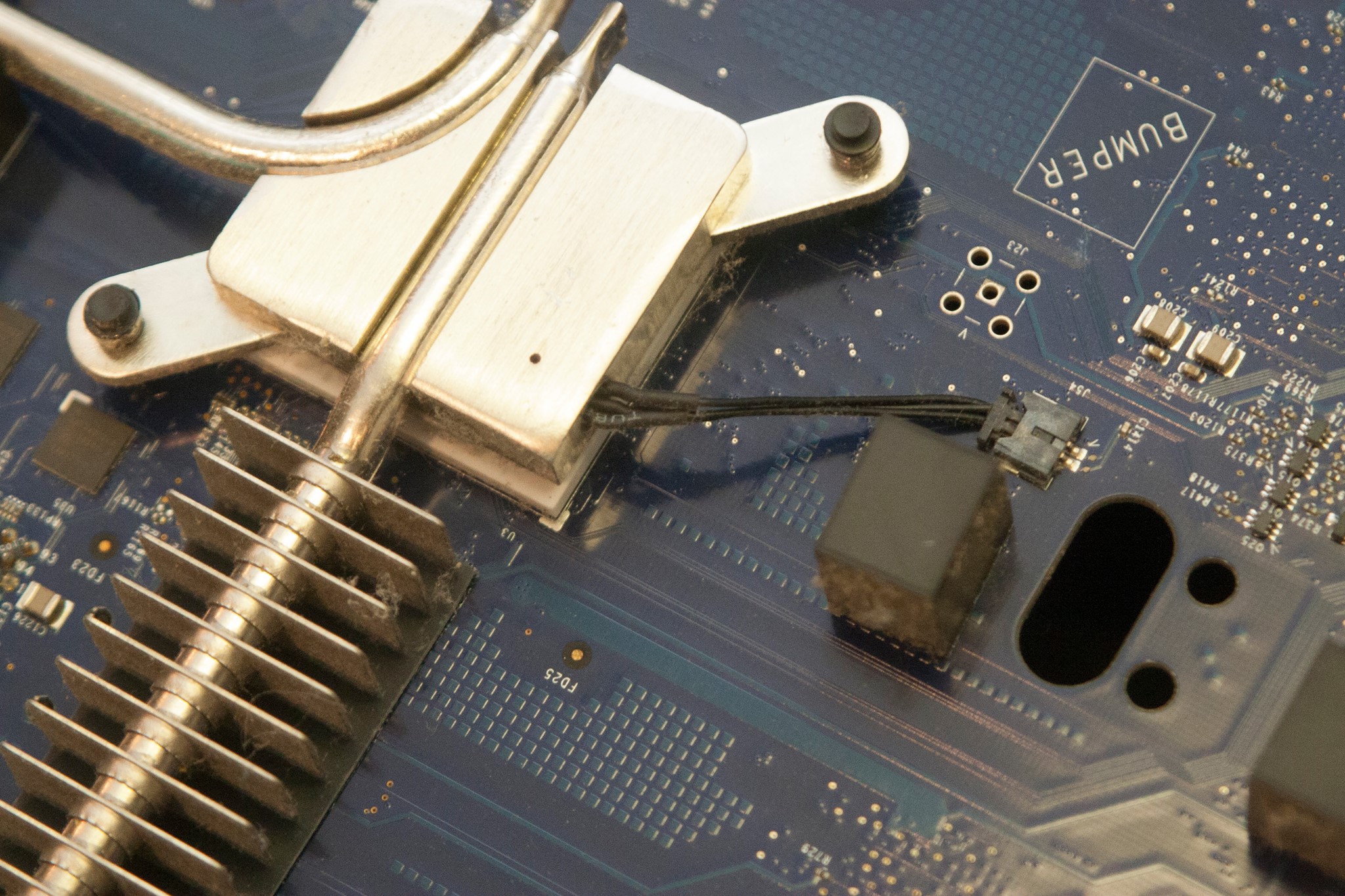 Even though this article mentions and depicts a Late 2005 Quad G5, all Power Mac G5’s have this fan and North bridge heatsink setup. The Quad has the largest heatsinks by far but even though they are smaller on older models, they’re there and can benefit from the same TLC.

That’s all for this piece. If you were unaware of this fan and it’s function, at least now you know what to answer next time someone asks “How many fans does a G5 have”. It’s all the obvious ones, plus one 😉