Hanging out in the various Facebook groups and other communities, I rarely run into anyone anymore that has a 2009 4,1 Mac Pro that still runs the stock firmware. But there are many Mac Pro users that are not aware of those communities or of the upgrade potential and possibilities for their Macs. They don’t see this kind of information on a daily basis like this geek. I took this knowledge for granted, forgetting there’s a whole world of people out there that have no idea this knowledge exists.
If you are one of those people or know one of those people that have a 2009 4,1 Mac Pro and want to squeeze another decade of life out of it, this page is for you!

This topic has been covered in the past but all those guides appear outdated, have broken links, needlessly complicated processes, or a combination of all those. Therefore I’ve decided to write a clear, to the point, 2021 version with links to pieces of this puzzle still available from their original source, and pieces no longer available that are now hosted on this website. So you’ll have everything you need in one place.

4,1 Mac Pro – 4,1 refers to the Model Identifier of the 2009 Mac Pro, MacPro4,1
5,1 Mac Pro – 5,1 refers to the Model Identifier of the 2010 and 2012 Mac Pro, MacPro5,1
Firmware – Code on a chip that gives the machine the basics of how it needs to operate
SIP – System Integrity Protection. A feature introduced in Mac OS X 10.11 El Capitan that protects certain system components such as the firmware from being edited or tampered with
CPU – Short for Central Processing Unit, also known as the Processor
GPU – Short for Graphics Processing Unit, also known as the Graphics Card
Mac Flashed GPU – A graphics card that allows you to see the startup/boot screen on a Mac. This can be an Apple GPU that came with your Mac Pro, or an aftermarket GPU that had Mac firmware flashed to it.
Metal – A new to macOS graphics framework that is required to install and run macOS Mojave and newer. Not every GPU can support this new Metal framework. It replaced the older and slower OpenGL framework you may have heard of or be familiar with. If your 4,1 Mac Pro has the GPU that came with the machine, you can be sure it is not Metal capable.

The 4,1 and 5,1 Mac Pro are 99.9% identical. The only major difference being the kind of processors they take in a dual-processor setup. So, giving the logic board of the 4,1 the firmware of the 5,1 allows you to do everything a real 5,1 Mac Pro can do.

Having your 4,1 Mac Pro think it’s a 5,1 Mac Pro, allows you to upgrade the OS past 10.11 El Capitan. 10.12 Sierra, 10.13 High Sierra and 10.14 Mojave will all install natively without further patching or other trickery. You will also be able to replace the 4-core processor with a 6-core processor. Or two if you have a dual-processor model. This can get your Mac Pro up to one or two Intel Xeon X5690 6-core 3.46GHz chips which is a major boost in performance. 3.06GHz and 3.33GHz processors are also options.
With faster processors come more perks than just a raw speed increase. The system bus will operate faster, the amount of cache goes up and last but not least; your Mac will be able to use faster RAM. The 4,1 Mac Pro uses 1066MHz RAM, the 5,1 Mac Pro uses 1333MHz RAM. Now that your 4,1 thinks it’s a 5,1 and with a newer processor, it can utilize the 1333MHz RAM as well, adding to the performance increase.

Can this be reversed? 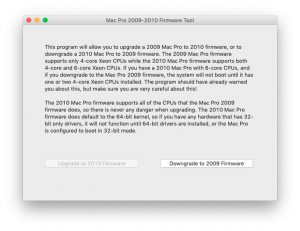 Yes, using the same files you can downgrade the firmware back to that of a 2009 4,1 Mac Pro. Keep in mind that you’d also have to put the quad-core processor back in. Downgrade the operating system to 10.11 El Capitan. And the 1333MHz RAM you may have installed may experience some weird quirks. The RAM *should* down clock it’s speed to 1066MHz but this is hit or miss depending on the brand and capacity of the RAM modules.
I suggest you save the FirmwareFiles.zip and the Firmware Tool app. If for whatever reason you want to downgrade your Mac Pro back to the original firmware, the same tool and files are needed. That said, I have yet to see a good reason to downgrade the firmware.

Which processor(s) should I pick?

I’m a big fan of the 6-core X5675 3.06GHz processors. They run fast, use a lot less power than their 3.33 or 3.46GHz alternatives, and inside a Mac Pro pretty much always run at their turbo boost speed of 3.46GHz. Also a pair of these averages $50 on eBay. It all depends on what you use the Mac for. I recommend taking a look at the Definitive Classic Mac Pro Upgrade Guide to see which processors are available to pick from, then pick one accordingly. Once you’re all done and enjoying a Faster and better Mac Pro, go back to the guide I just linked to and read all of it. You’ll learn a ton and might get other good ideas on how to further improve your Mac!

Is there more that can be done?

Since you asked, yes there is! Your Mac is already identifying as a 5,1 and there are more firmware updates you can now do. If you’re running Mac OS 10.11 El Capitan or 10.12 Sierra, you can use the 10.13 High Sierra installer to get firmware “MP51.0089.B00” which brings APFS support and several security bug fixes to the microcode. If you have a GPU that is Metal capable, you can use the Mojave installer to get firmware version “144.0.0.0.0” which brings all improvements from previous firmwares along with NVME SSD boot support and other enhancements.
These firmware updates are part of the OS installers but they are separate steps. So you can run the installer, do the required firmware upgrade, then quit the installer. This allows you to use the latest firmware without having to run that particular operating system. Unless you want to, of course.

No need to try this with macOS 10.15 Catalina or 11.1 Big Sur. These operating systems are not natively supported by the 5,1 Mac Pro so no new firmware was made for these machines. The Mojave firmware is as good as it gets. But hey, that’s firmware several years newer than the one you were running before!

You can get macOS Catalina or Big Sur installed on your Mac Pro, quite easily too but I’ll get into that some other time. Just know those operating systems won’t offer any firmware benefits.

I hope this to-the-point guide was helpful. Let me know in the comments any feedback you may have!