In the last week of 2020, I took up a new hobby; 3D Printing.
Prior to receiving the printer, a good two weeks of non-stop research was done looking into almost all aspects of 3D printing and I learned a lot. This research definitely saved me a good amount of time once I received the printer and apart from some calibration issues, I was printing good-looking stuff after about a week.

One of the things I researched was the potential health risks of running a 3D printer. In hindsight, I should have done more actual research and less taking people’s word for it.

The first filament (print material) most, if not all, folks new to 3D printing start out with is PLA. Polylactic Acid (PLA) is different than most thermoplastic polymers in that it is derived from renewable resources like corn starch or sugar cane. As such it is considered a “bioplastic”. The general consensus is that printing PLA is perfectly safe and no harmful gasses (VOC’s) or particles are released in the process. No enclosure is needed and as long as the space the printer is in is well ventilated, no worries. For other filaments such as ABS an enclosure is a must but I am still many months away from printing anything other than PLA. Happy with the plethora of advice I got on Facebook groups and various websites, I continued my research into other aspects of 3D printing. 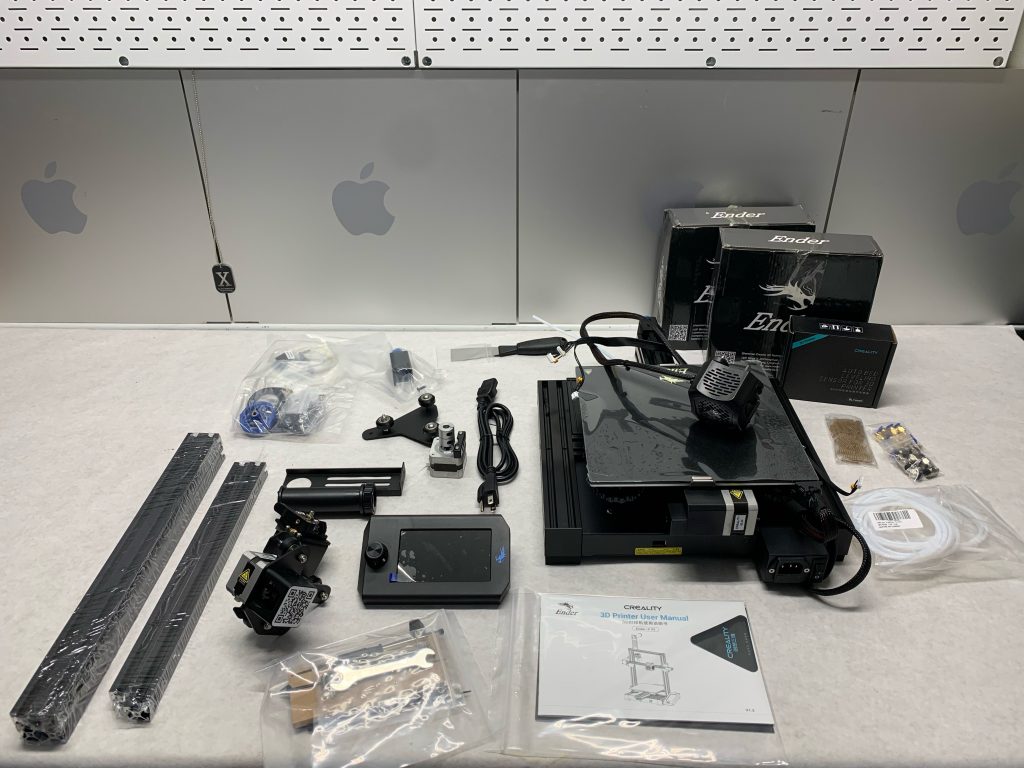 How the research fell short

A few days into printing I started getting headaches. Subtle at first but more prominent before the first week was over. I felt like I was fighting off a cold and by the end of the second week, I even experienced a few small nose bleeds. Now I have a headache only once a decade so this was highly unusual for me. And random nosebleeds are something I haven’t had since I was 7. Something was going on.
It took me a week to piece it all together. The only thing that changed since Christmas was the 3D printer, set up on a desk 3 feet away from me, cranking out prints for hours on end.
Hindsight is always 20/20 but at the time the idea of the printer causing this didn’t even enter my mind, I was told printing PLA was safe after all and there is always a window open in my office. Thinking back though, my room air purifier kicked into high gear constantly since I started printing. This is also very unusual as it typically only kicks out of idle when I am cleaning, dusting off a Mac board or when the cat farts (this thing is a scary accurate fart detector let me tell ya!)

I brushed that off as it being dusty, I did just clean and reorganize my office, after all, to make space for the printer. But something was freaking out the sensor in this air purifier every day all day. Once it crept into my mind the printer could be the cause of all this, I shut it down, aired out my office, and left the printer off for two days. The first day with no printer the headaches vanished like the local snow forecast (I haven’t seen a good amount of snow in a while 🙁 ). There were traces of blood but no nosebleeds and the second day it was all clear, I felt like my good old self again. I went from feeling like I was fighting a serious cold to completely normal in under 48 hours.

An experiment is useless if the results can’t be reproduced so I switched the printer on and started a 5-hour print. Within 20 minutes the headaches were back and by the end of the afternoon, I felt like I was getting a cold again. The room air purifier also had a busy day again after two days of not getting out of idle either.

I don’t care what more experience people say, what some websites say, and what some videos say; printing PLA even in a well-ventilated room caused me headaches, feeling ill, and nosebleeds. Fact. 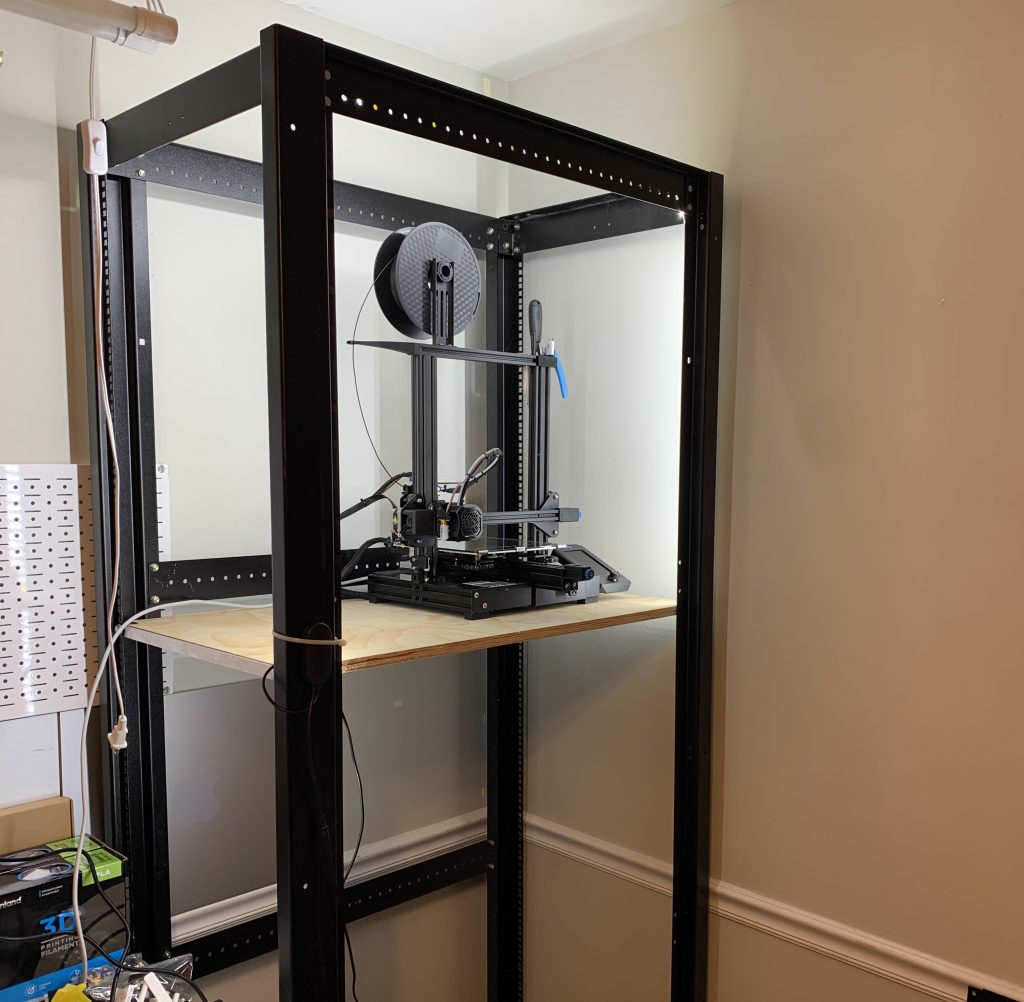 With the cause confirmed, I set out to build an enclosure for the printer. An old unused 42U 4-post server rack would be a good candidate for this. I set it up and using 2mm plastic I have around, I built a makeshift enclosure. It wasn’t air-tight by any means but it was 90% enclosed. With this setup, I started another 5-hour print, and…. a few hours in I detected a hint of a headache and the room air purifier kicked on a few times but not nearly as much. I didn’t feel sick which was a big improvement. The enclosure, as I figured it would, needed improvements. The improvements were made and a small air purifier with HEPA and Carbon filter was placed inside the enclosure as well, and so another 5-hour print was started. No headaches, room air purifier remained on idle the entire time. With this enclosure V3, I have now been printing on and off for 4 days without issue. Now that I know this is the answer, I will source the proper materials to make a good enclosure that not only looks good but is fully functional as well.
Now that I’ve got a taste for 3D printing, there is no way I’ll ever stop. This is simply too awesome to give up! But I certainly will never run a 3D printer without an enclosure ever again.

After doing more targeted research into this, I have found numerous sources that confirm printing PLA produces considerable VOCs and nanoparticles, and oh, have I mentioned the formaldehyde? Yeah, that was detected in the tests too. Maybe I am more sensitive to these things than most or maybe my office ventilation is inadequate, I don’t know. What I do know is that all these delicious VOCs and nanoparticles (some call them Ultra Fine Particles, some call them microparticles, some call them nanoparticles. At any rate, they’re damn small!) are floating around in the space occupied by the printer, and possibly other areas as well.

This entire article has been about PLA filament. There are many brands and types of PLA, each one slightly different. Maybe if I print with another brand or color, I won’t have these issues. I’m not risking it. Apart from PLA, there are a whole bunch of other filaments one can print with but PLA is considered to be the safest and harmless. Imagine what any of these other filaments crank out in VOCs and particles?

As one tester on youtube pointed out “one cigarette is not going to kill you, it’s the habit that kills you”. These particles are small enough to find their way into your bloodstream, through the blood-brain barrier, and into your brain. You are burning plastics, bio or not, at a high temperature. Anyone that tells you it’s safe simply has not done their research. Infrequent exposure may not be a problem but frequent exposure can potentially lead to all sorts of issues. Maybe not for you, maybe you’re more capable of handling this stuff. What about your pets? Or your kids?

I am of the firm belief that regardless of what filament you’re printing with, an enclosure with a filter solution should be used. It might not bug you now but you (and researchers) have no idea what kind of health complications exposure to this stuff can cause in the future.

I realize this is a boring post and the few images I did use were just to make it slightly less boring. But this information is important and the potential health risks are more often than not laughed off as nonsense or seriously underestimated. As someone new to the 3D print world myself, I felt it important to get this warning out there. I welcome any feedback in the comments below!

In no particular order, here are some of the sources for my research (but by no means all of them):

More importantly, I trusted my own body to tell me something was wrong, which is something you should certainly pay attention to as well.

3 thoughts on “3D Printing and one often overlooked, ignored or misrepresented problem”