My apologies, sometimes I take certain information for granted. When I see people on Facebook and other forums ask “what’s the difference between 4,1 and 5,1 Mac Pro?” or “Can I use a 4,1 CPU tray in a 5,1 Mac Pro” I think to myself ‘this is common knowledge, isn’t it?’.

No, it’s not. Even in 2020 (and years to come), there will be plenty of people that first get started on upgrading an older Mac Pro or maybe even owning one for the first time. To them, this is not common knowledge. So, since I haven’t written anything in a while, allow me to explain 🙂

Why does this article only explain the difference between the 4,1 and 5,1?

The 4,1 and 5,1 models are 99.9% identical when it comes to hardware. As such, a 4,1 can be firmware flashed to 5,1 and can be upgraded the same way as a ‘real’ 5,1. Flashing the firmware of a 4,1 to that of a 5,1 allows for faster processors and RAM to be installed. It also means the flashed Mac can support macOS Sierra, High Sierra, and Mojave natively. Something it can not do when still running the 4,1 firmware.

All other models can not exchange parts with the 4,1 and 5,1 and vice versa.

Until you take it apart, there are none, apart from some component positions such as capacitors and unused connectors. The only difference is in/on the processor (CPU) tray. This article focuses on the dual-processor models but I will touch on the single processor models later as well.
Here is the CPU tray of a 4,1:

You’re not crazy and I did not trick you. They are the same. The screw-holes on top of the heatsinks are positioned differently but that is something easily overlooked. Now let’s take the heatsinks off and have another look. 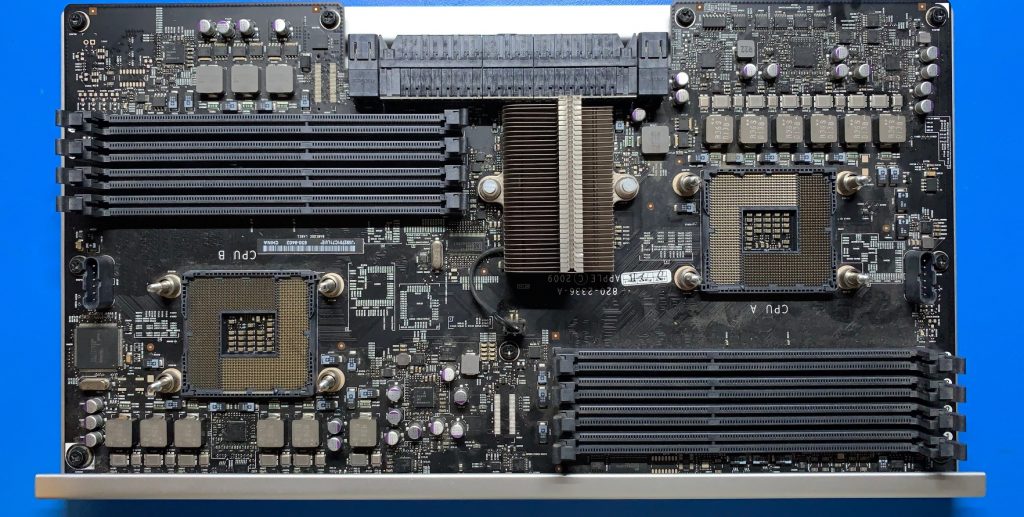 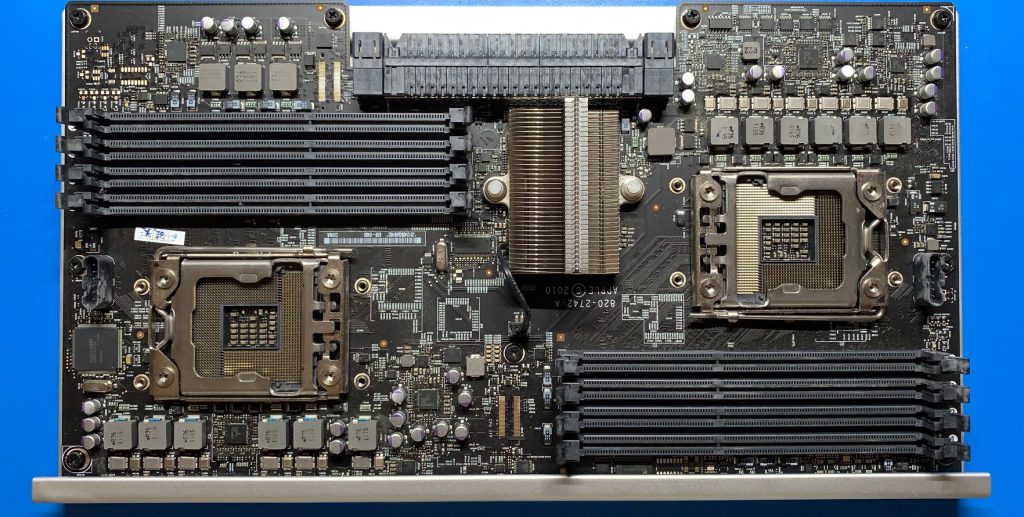 Now the differences are a little more obvious. Subtle differences such as board markings and components being slightly different aside, the CPU sockets are way different. On a 4,1 CPU tray, the processors lay loose in the socket and the heatsink holds them down. On a 5,1 there are clamps holding the CPU in the socket. You will also find Copyright markings which makes them easily identifiable. ©2009 for the 4,1 and ©2010 or ©2012 for the 5,1. 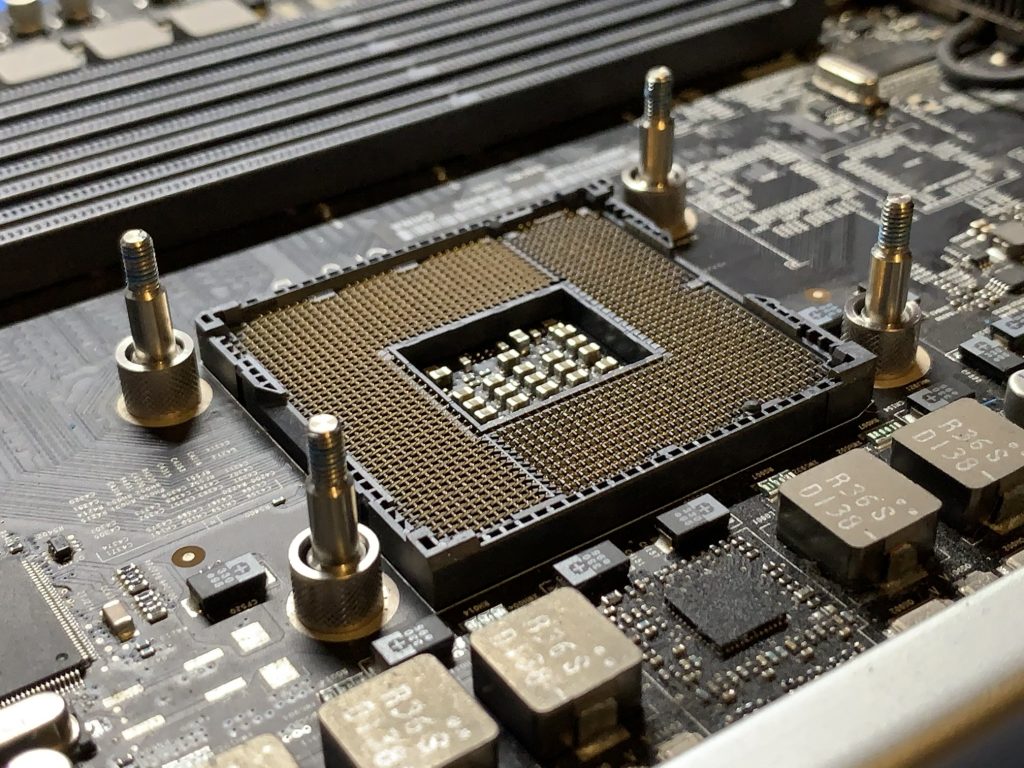 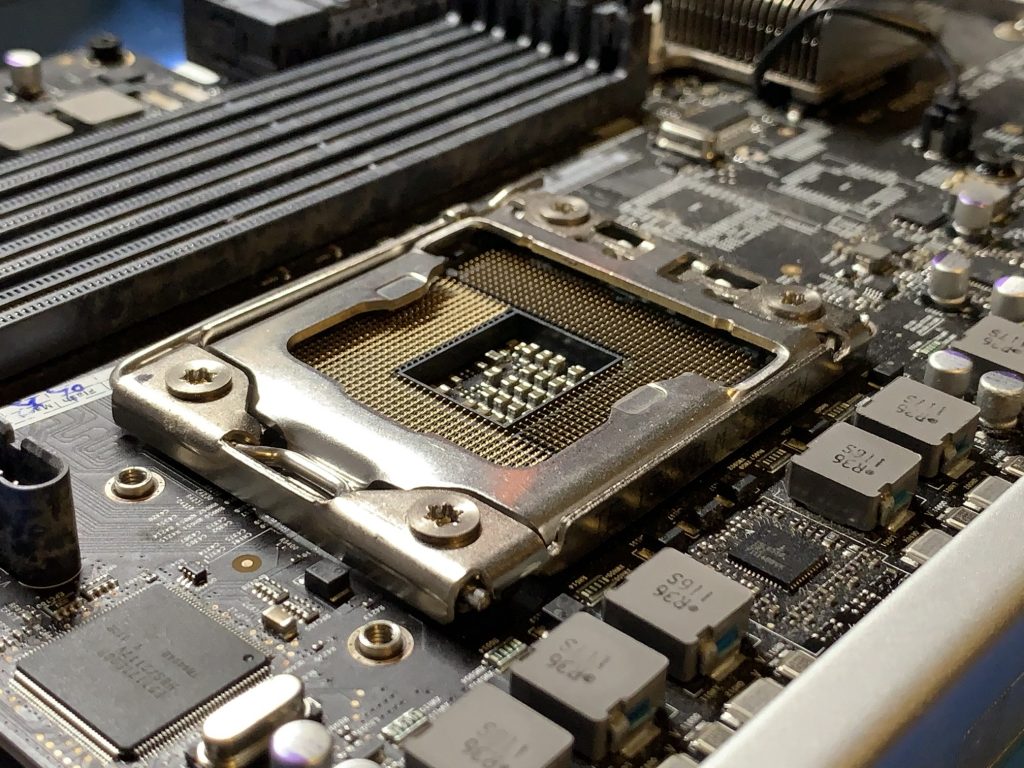 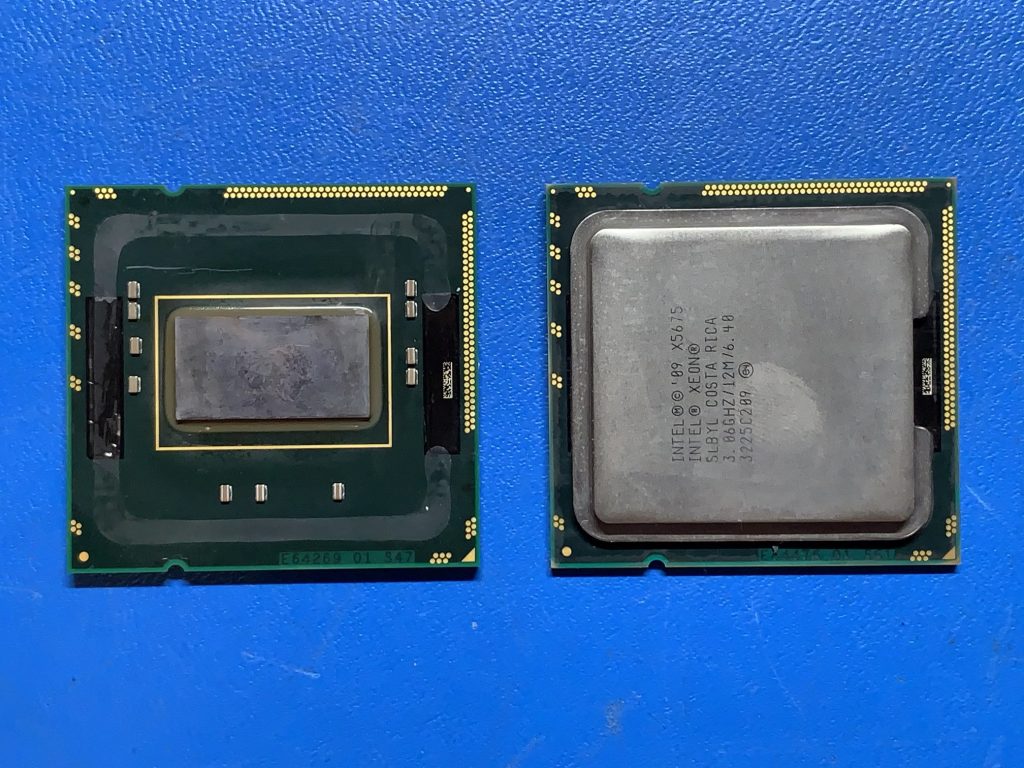 Lidded CPUs are too thick for the 4,1 CPU tray and de-lidded CPUs are too skinny for the 5,1 CPU tray. There are ways to get lidded CPUs in a 4,1 tray, this requires the use of spacer rings on the four heatsink screw posts to make up for the thickness of the heat spreaders. Without spacer rings, one risks too much pressure on the CPU which can damage the socket. Spacer rings also ensure even pressure. There are thermal pads on the heatsinks that transfer heat away from certain board components, if a lidded CPU is used in a 4,1 tray, additional thermal pad strips must be applied to ensure contact. Lidded CPUs in a 4,1 tray can be done but I advise against it.

There are no tricks to make de-lidded CPUs work in a 5,1 tray. The heatsinks will not make contact with the CPU and the clamps have nothing to push down on with the heat spreader missing so the CPU would loosely float around in the socket.

What if I can’t find de-lidded CPUs?

All CPUs compatible with the 4,1 and 5,1 Mac Pro are sold with heat spreaders on them, specific models for the 4,1 Mac Pro’s excluded. If you want to upgrade your 4,1 CPUs to something better than was possible at the time, you will have to de-lid them yourself, send them to someone to de-lid them for you, or spend a decent amount of money extra for de-lidded CPU’s on sites such as eBay. There are people selling de-lidded CPU’s but prices are usually ridiculous. It’s easy to do this yourself, have a look at my video here. If you want someone else to de-lid your CPUs for you, I can help with that too.

This would certainly make things easier, unfortunately, the CPU trays are not interchangeable. Putting a 4,1 CPU tray in a 5,1 or vice versa will result in the fans running full blast and/or the Mac not booting up. Flashing a 4,1 Mac Pro to 5,1 firmware has no effect on the CPU tray itself so firmware flashing can not be used to make these trays compatible. This goes for both single-CPU and dual-CPU trays. Heatsinks are also not interchangeable between the 4,1 and 5,1.

I get the differences now but why write about it?

As these Mac Pro’s age, people want to upgrade them to their fullest potential. The above information is good to know if you are using a single-CPU tray and want to upgrade to a dual-CPU tray, knowing what to look for so you don’t buy the wrong one. Or if you’re looking for spare/replacement parts. It’s also good to know what is currently inside your Mac Pro if you go out looking for new processors to upgrade your existing ones.

At some point, if you keep your 2009-2012 Mac Pro around you’ll want to install a dual-CPU tray, get a few 6-core CPU’s in there, and 1333MHz RAM (the 4,1 uses 1066MHz RAM but the earlier mentioned firmware flash will let your 4,1 use the faster RAM as well with the right CPU’s). Upgrading the CPU’s and RAM are huge lifespan-increasing things you can do but upgrades certainly don’t stop there. For more tips and ideas on how to get the most out of your Mac Pro, have a look at The Definitive Classic Mac Pro (2006-2012) Upgrade Guide. This guide was created in 2018 but is updated as new information becomes available. The Facebook group MacProUpgrade is also an amazing resource for help, questions, and sharing. That group is home to over 19 thousand users so if you’re reading this thinking you’re alone, you certainly are not!

I hope this clarifies all that needs to be clarified 🙂
If something else comes to mind I will add it later and if I forgot something, please let me know in the comments.