As the 2023 PPC Challenge is well underway, it was time for Maya to make an appearance again. As we’re used to from these machines (once the power supply has been fixed), it fired right up. This year I want to play with some of the cool projects out there such as Arctic Fox, Message Bridge, Discord Lite, and others. So the original plan to use the Pismo went out the window. Style alone was not going to cut it, I needed muscle as well, so Maya was called upon.

In July of 2018, I had plans to upgrade the stock ATI Radeon 9000 with 64MB of VRAM as it was just not cutting it for my games. An ATI Radeon 9600 with 128MB of VRAM was procured and modified to work in the G4. A pleasant surprise was finding out this card was actually a Radeon 9650 with 256MB of VRAM. The card handles anything I throw at it and has treated me well since but it runs hot when pushed, very hot. And sadly the MDD is not known for its stellar thermal management. So the search began for a GPU that would match the 9650 but had a fan on it.

In August 2018, an ATI Radeon X850 Pro with 256MB of VRAM was recommended by notorious bad influence Greg Hrutkay. This card would need some modifications to work in an MDD though so it was shipped off to Collin Mistr (dosdude1). If you’re up to speed on the Maya Chronicles, you may remember this planned upgrade never happened… 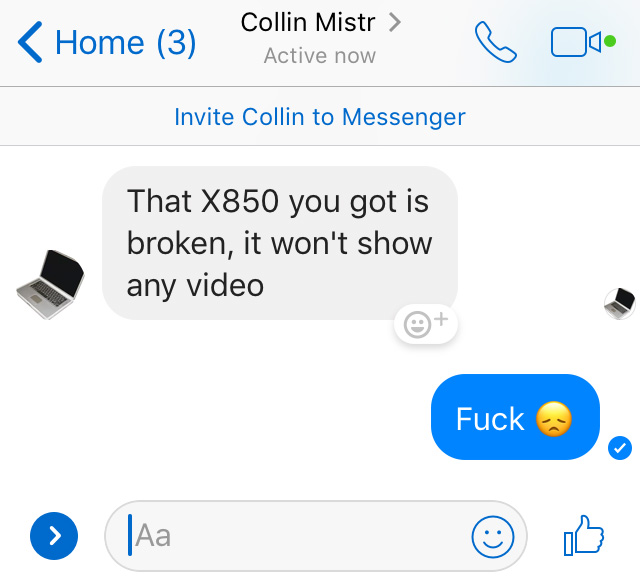 Fast forward to the end of December 2022. During a live stream of Mac Yak, dosdude1 casually drops me a line in the live chat.

I had forgotten all about that card! Boy am I glad he never cleans his basement, that card could have been tossed out years ago. We chatted a bit after the show and bada-bing bada-boom a payment for his services and some waiting on USPS later, the second GPU upgrade I had planned for Maya, can finally happen some 4 years later.

The box felt heavy, much heavier than I expected, but it only contained the GPU I asked for. I took the 9650 out of the MDD and it was indeed much lighter than the X850. The heatsink on the X850 weighs more than the entire 9650! Sounds like this will meet my cooling needs.

By using this card I sacrifice the ability to run two DVI displays but I haven’t had the space for two displays recently anyway, so this is something I can do without for now. I do have a VGA port on the X850 I can use if needed. Now, let’s see if this card is everything I want it to be! After some horsing around and not getting anywhere, I found out the MOLEX connector on the card is there for a good reason; it needs additional juice. Of course, nary a MOLEX extension cable in sight, so one was ordered. Another few days of waiting later, the cable arrived and I could try again.

There appear to be some anomalies where this card causes random PCI slots to not work. Most of the time it’s my FW800 or USB 2.0 card but sometimes it’s my SATA card which causes the Mac to not boot. Either way I have yet to see all slots functional with this card in the MDD, something that doesn’t happen with the 9650. That’s an investigation for another time though. For now, the card is in and a test was done. 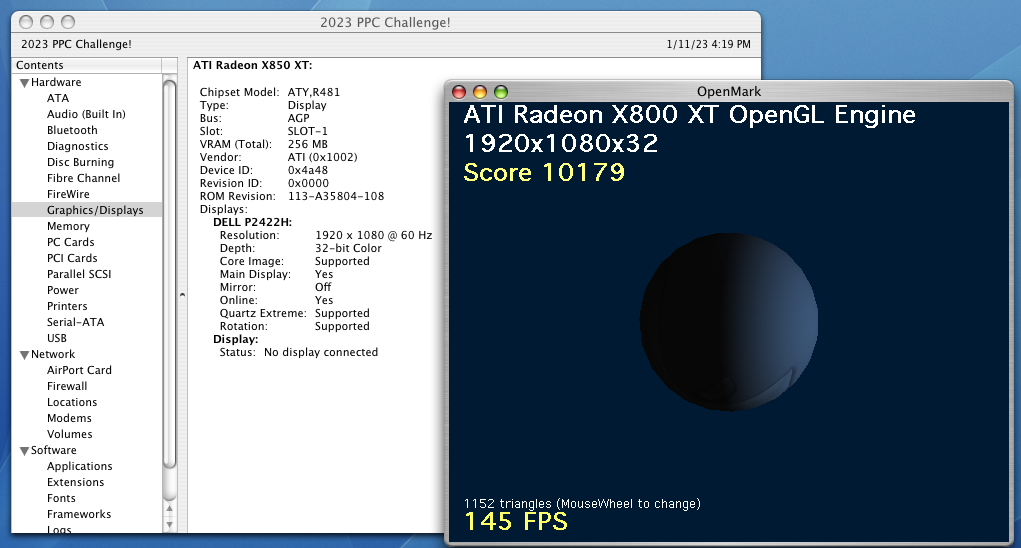 Wahooo, not bad at all! This is quite a jump from the 5018 score the Radeon 9650 spit out, which was already a huge step up from the 1331 score the stock Radeon 9000 achieved. A 764% increase over stock and a 202% increase over the last upgrade. Sounds great by the numbers but how this translates into real world usage is probably considerably less dramatic.

The OS runs well and games run well. All with the highest settings. And because of the massive heatsink and fan the X850 sports, I shouldn’t have to worry about overheating the GPU any time soon. If I can figure out the PCI slots issue, this card will be the default.

And so, Maya is still receiving upgrades in 2023!

If you are not currently neck-deep in PPC awesomeness, grab any PPC machine you can find and join us in the ongoing 2023 PPC Challenge 🙂