If you want to give a Mac a good stress test to see if the core components are up to snuff, Prime95 is (one of) the ways to go.
It includes something called the “Torture Test” and it is as brutal as it sounds. Core 2 Duo or Xeon, Prime95 will put it to work like nothing else.

It’s not just the CPU that’s tested, it’s the L1/L2/L3 caches, north bridge, RAM and all that connects those components together. Letting Prime95 run for an hour will show you what a Mac is made of. I run Prime95 to test repaired Macs, to test Macs I purchase and to test Macs I use frequently just to see if the hardware and cooling system is still working properly. 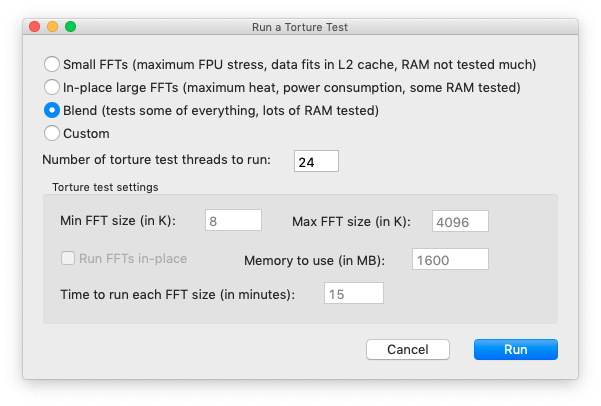 Prime95 will have your Mac running HOT so it’s also a great way to test the thermals. Are the fans spinning up fast enough? Are the temperatures held in check? Maybe it’s time for new thermal paste? Is my Mac throttling? Is my fan control software configured properly? Not two days ago I used Prime95 on a Mac mini and it couldn’t handle it. 20 minutes in it hard locked and I had to pull the plug to shut it down. Turns out one of the RAM modules had gone bad. A RAM module, mind you, that other diagnostics utilities showed as being just fine.

I swear by this utility and use it almost every day. It doesn’t touch storage devices apart from running off of it but if you feel nervous, back up all your data before running such a strenuous test on your Mac, just in case. In fact, your data should always be backed up regardless of what you do. But that’s a topic for another time 🙂

A short one this week but an important one. See ya next time!

Liked it? Take a second to support Jay on Patreon!

Support me on Patreon!